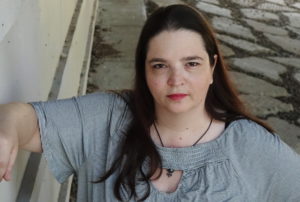 It is my pleasure to introduce Colorado Author, Stephanie Reisner, who has graciously agreed to provide a guest post about the Symbolism of the Tarot. She writes both fiction and non-fiction and has been reading tarot for thirty years. She lives along the front range of the Rocky Mountains with her husband and three cats. To learn more about Stephanie and her books, visit her website.

Power of the Tarot

The power of the tarot is not in the occult sciences like many people would like to believe. The real power in tarot is in the imagery and the human mind’s ability to correlate these images to our deepest desires and greatest fears. Therefore, reading tarot depends a great deal on the reader’s ability to not only read people, but to read symbolism.

The origin of tarot goes back to the fourteenth century and the cards originally weren’t used for divination. That came much later. Originally, the tarot was used as a party game wherein random cards were dealt to players and the players would use the images from the card to inspire poetry. It was often said something to the effect of, whichever cards you were dealt were your lot in life. Whether that inspired their later use in divination is up for debate. In other instances, early decks were merely playing cards like the common playing cards we use today.

The popularity of tarot cards in mystical fortune-telling was likely due to publisher William Ryder and famed occultist A. E. Waite in the early 1900s. These are the tarot decks we think of when we think of tarot today. Modern tarot is imbued with various symbolism meant to have meaningful spiritual significance. Within the standard tarot deck there are the major arcana (twenty-two cards) and the minor arcana which are indicative of the standard fifty-six-card playing deck.

Notice how the symbols are correlated to elements which correlate to human emotion and experience. Of course, tarot symbolism goes further than that. The use of color and pictorial symbolism brings a myriad of meaning into a single card.

Let us take, for example, the card DEATH. In most modern decks, the death card includes the frightening figure of death itself, often as a skeleton. It’s important to remember that the meanings of various cards have changed over time based on the view or perception of the symbolism within popular culture. While further back in history the DEATH card may have been seen to foretell misfortune, the modern interpretation, agreed upon by every tarot reader I’ve ever met, is it’s a change/transformation card. Let’s look more deeply into the symbolism of this single card to discover why. 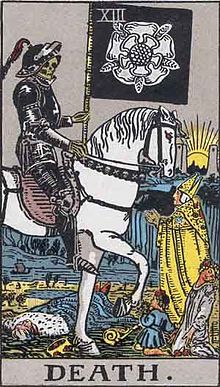 In the Rider Waite deck, one of the most common tarot decks in use today, death is riding a white horse and carrying a flag. On the ground lies the king, who has died – his crown a few feet from his body. In front of the horse a priest dressed in gold robes (signifying spirituality, which tells us he’s a priest) appears to be petitioning or bargaining with death for mercy. Meanwhile, a child looks upon death in awe and wonder as a woman turns her head away. All the while the sun is seen in the background either setting or rising over the entire scene. This card bears the number thirteen.

Pause for a moment and consider the rich symbolism in this single card. The only one who has accepted death completely is the king who is already dead. The child is more accepting than the woman or the priest. The fact that death is riding a white horse suggests that death is a transformation as white is a color in the tarot that means purity and gentleness. The priest who is bargaining with death appears to be hoping he can change the situation through spiritual means. The child is at peace with death and wears blue, the color of understanding. You can almost tell that the child finds death wondrous and interesting. The woman, who wears gray (the color of wisdom in the tarot) looks away as if looking upon death would seal her fate. And because we can’t tell if the sun is setting or rising we are unsure if this is the dawn of a new day, or the end of another.

Therefore, the interpretation of the card means that the person it was pulled for is either in for a major change in their life or is having a difficult time accepting change. This card is a reminder that we cannot bargain changes away and must let go and accept that one door has to close in order for a new door to open.

To go through all the cards in this one blog post would be quite exhaustive and far too. However, if you find yourself interested in learning more, buy yourself a tarot deck. Study each card individually, taking into account the symbolism, images, and colors of each card. By doing this you can learn their meanings, and you too will be able to read tarot.