CURSE OF CLANSMEN AND KINGS SERIES 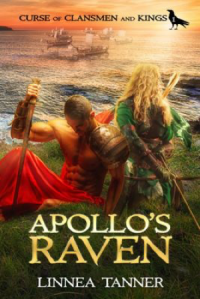 AWARD-WINNING APOLLO’S RAVEN sweeps you into an epic Celtic tale of forbidden love, mythological adventure, and political intrigue in Ancient Rome and Britannia. In 24 AD British kings hand-picked by Rome to rule are fighting each other for power. King Amren’s former queen, a powerful Druid, has cast a curse that Blood Wolf and the Raven will rise and destroy him. The king’s daughter, Catrin, learns to her dismay that she is the Raven and her banished half-brother is Blood Wolf. Trained as a warrior, Catrin must find a way to break the curse, but she is torn between her forbidden love for her father’s enemy, Marcellus, and loyalty to her people. She must summon the magic of the Ancient Druids to alter the dark prophecy that threatens the fates of everyone in her kingdom.

Will Catrin overcome and eradicate the ancient curse. Will she be able to embrace her forbidden love for Marcellus? Will she cease the war between Blood Wolf and King Amren and save her kingdom? 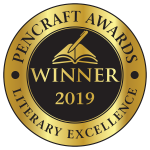 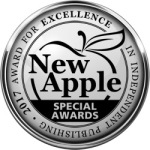 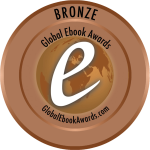 The audiobook sample is taken from Chapter 51 when Catrin escorts Marcellus to the hostage exchange site. 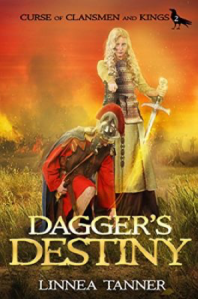 A Celtic warrior princess accused of treason for aiding her enemy Roman lover must win back her father’s love and trust.

In the rich and vibrant tale, Author Linnea Tanner continues the story of Catrin and Marcellus that began with the awarding-winning novel APOLLO’S RAVEN in the Curse of Clansmen and Kings Series. Book 2: DAGGER’S DESTINY sweeps you into an epic tale of forbidden love, mythological adventure, and political intrigue in Ancient Rome and Britannia.

War looms over 24 AD Britannia where rival tribal rulers fight each other for power and the Romans threaten to invade to settle their political differences. King Amren accuses his daughter, Catrin, of treason for aiding the Roman enemy and her lover, Marcellus. The ultimate punishment is death unless she can redeem herself. She must prove loyalty to her father by forsaking Marcellus and defending their kingdom—even to death. Forged into a warrior, she must overcome tribulations and make the right decisions on her quest to break the curse that foretells her banished half-brother and the Roman Empire will destroy their kingdom.

Yet, when Catrin again reunites with Marcellus, she is torn between her love to him and duty to King Amren. She must ultimately face her greatest challenger who could destroy her life, freedom, and humanity.

Will Catrin finally break the ancient prophecy that looms over her kingdom? Will she abandon her forbidden love for Marcellus to win back her father’s trust and love? Can King Amren balance his brutality to maintain power with the love he feels for his daughter?

The audiobook sample is taken from Chapter 1 when King Amren accuses his daughter, Catrin,  of treason for aiding her enemy Roman lover, Marcellus. 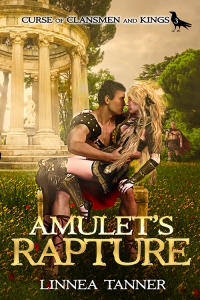 Blood stains her Celtic home and kingdom. The warrior Druid Princess will do anything to retake her throne.

But Marcellus has been wounded and his memories of Catrin and their secret marriage were erased by a dark Druidess. Though Marcellus reunites with Catrin in Gaul and becomes her ally as she struggles to survive the brutality of her Roman master, he questions the legitimacy of their marriage and hesitates to help her escape and retake her kingdom. If their forbidden love and alliance are discovered, her dreams of returning to her Celtic home with Marcellus will be shattered.