I am pleased to announce the e-book and softcover book of Apollo’s Raven have been republished. Revisions were based on feedback I received from reviewers regarding word choice and inconsistencies. Quotes within the book have been deleted at the beginning of each chapter.

As an author, I value readers’ reviews and constructive feedback, as this helps me to write quality books that each of you can enjoy. Feel free to contact me if you have any feedback or questions. A major twist in Empire’s Anvil is based on a question that a reader asked me: What happens to the soul of a person who is possessed by another soul?

To celebrate the New Apple book awards, the republished e-book of Apollo’s Raven will be offered at Amazon for the Bargain price of 99 cents through February 23rd. Click on the following to purchase:

As a preferred e-mail subscriber, you will be eligible to win monthly giveaways beginning in March 2018 through the Fall. The giveaway will be announced each month and could include an Amazon gift card, signed hardcover special edition or e-book of Apollo’s Raven, or an advanced copy of Empire’s Anvil (anticipated summer 2018).

The March 2018 Giveaway will be a signed copy of the special hardcover edition of Apollo’s Raven.

For those who have bought the Apollo’s Raven book, send me a photograph of yourself holding the book at  linnea@linneatanner.com. Indicate what city you are from, and I’ll post the photograph on my website.

Below are some recent photographs, including Joni’s cat that loves to sleep next to the Apollo’s Raven book.

Thank you for your continued support!

As always, I appreciate your support and would love to hear from you. 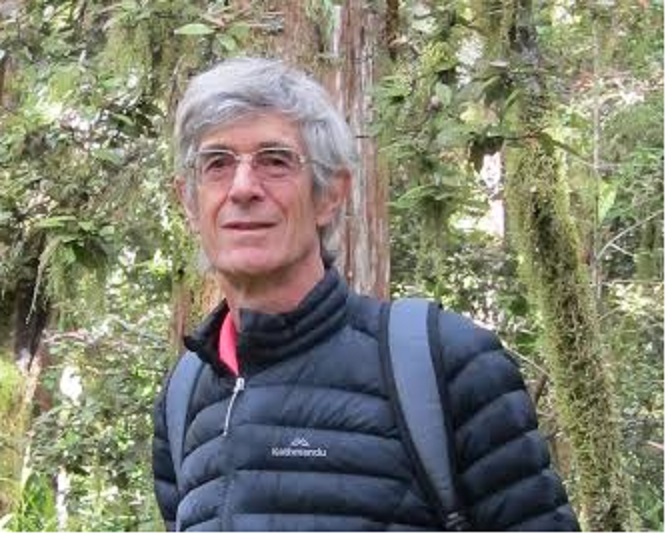 It is my pleasure to introduce Linus Treefoot, the debut author of Bright Moon Ridge. The book is a 2017 Apple Summer e-book Award Winner: Runner-up in the Historical Fiction category. Linus was born in the United States, but has lived most of his adult life in New Zealand. He has a fascinating life journey in which he has extensively researched and traveled to China in preparation for his debut novel.

Linus Treefoot graciously accepted my invitation to interview.  Below is his biography, responses to my interview questions, and ways you can contact him. Click on the book cover below to purchase his book at Amazon.

Linus Treefoot is an American who has lived in New Zealand for 47 years. He graduated from Stanford University in 1968, then spent about 10 years doing carpentry and farm work, traveling and having a good time. For many years he was a part time entertainer, playing guitar and singing solo or in bands. He has been a primary school and English (ESOL) teacher for about 35 years. He is married to a Chinese woman who grew up in the People’s Republic of China. They have two adult children. When he doesn’t have to work, his interests are music, reading, learning Chinese, swimming and hiking.

Would you provide an overview of the newest book that you have released in 2017?

Bright Moon Ridge is the story of a 19-year-old male, Johnny Bartooth, who is given a journal which was written by his father many years before. His father went to China in 1980 to find his mother, marry her and bring her to the USA. No one whom Johnny knows ever heard from either of them since.

Johnny’s curiosity is ignited and he resolves to go to China to search for his mother and father. Most of the book is about this search for a family he never had.

What or who inspired you to become a writer?

No person in particular. From high school on, I enjoyed expressing myself through writing – at first through poetry and songs more than any other genre.

What inspired you to write Bright Moon Ridge about a young man’s search for his missing parents in China?

My first motivation was to record and fictionalize my life as a hippy in the hills of California and in the backwaters of New Zealand in the 1970s – some outrageous stories and eccentric characters. The germ of the story of Bright Moon Ridge came when in 1990 I met a guy who had just returned from China; he told me that he had had a stealthy affair with a married woman doctor. I expanded on his story in my imagination and intertwined it with those stories I had been considering for years based on my wild life as a hippy. Through many stages of rewriting and editing, the hippy stories were deleted in order to have a more cohesive novel.

How much research was involved in writing your book? How did you go about it?

In 1990 also I met and married my lovely wife, Ma Yue Ying, who grew up during the Cultural Revolution; tales from her own and her family’s history were put into the mix. I developed a strong interest in Chinese history and culture, and began to blend political and historical elements into the story. I did a considerable amount of research through reading and through travelling in China, including two trips to Hainan Island. My wife helped a great deal in translating conversations and some books written in Chinese. Writing this novel was an obsessively absorbing task for me.

They don’t usually act outside of what I consider their temperament and personality, but sometimes do uncharacteristic things. For example, gentle Mei, when attacked by her fellow prisoners, eventually strikes out in a surprisingly violent way

The reviews have been consistently very positive, which has been an encouraging and pleasant result.

Do you have any other books planned?  If so, would you give an overview of what the book(s) are about?

In the short term, no. But I think I have at least one more novel in me. There is all the material that I deleted from my original drafts of the novel.

Probably being chosen to work as an English teacher in Massey University. It was a major goal of mine for more than 10 years previous. That was the best job I ever had; I worked there for more than 15 years.

Kindness is to me the most valued trait. I also highly appreciate a good sense of humour (translated: someone who laughs at my jokes) and I appreciate someone who can converse about politics and literature.

Being able to play the piano very skillfully.

I left the USA when I was 24 in protest over the Vietnam war and the way the government worked. I was almost ecstatic to arrive in relatively backward New Zealand where – without having any friends or acquaintances — I enthusiastically began a new life.

A punch line that is completely different from what you’d expect, e.g. “If you give a man a fish, he will escape hunger for one day. But if you teach a man how to fish, he will sit in a boat all day and drink beer.” Or alternatively, a joke or story in which the teller pretends to be exceedingly stupid, e.g. “Do you know about the tick inspector? If a man comes to your door and says he is a tick inspector and asks you to take off all your clothes and turn around and around, don’t do it! He’s not the real Tick Inspector…. I only wish someone had told me before.”

Walking through the bush and looking at the trees and patterns of sun and shade.

Bright Moon Ridge can be purchased at AMAZON.