It is my pleasure to introduce Ryanne Glenn—an exciting debut Colorado YA fantasy author.  I met Ryanne through the Northern Colorado Writers Organization and have had the opportunity to learn more about her as an author. I’m quite impressed with her ability to balance a heavy workload in Chemical and Biological Engineering at the Colorado State University and being an author. Imagine my excitement when she told me her YA fantasy trilogy had been accepted by Atthis Arts, LLC for publication. Her first book, Descent of Shadows, in the trilogy was just released on December 11, 2018.

Ryanne graciously accepted my invitation to interview her. Below are her biography, interview, and contact information. I encourage you to follow her and check out her website. She in an inspiration to all aspiring young writers whose dream is to publish.

R‌yanne Glenn is a member of the Northern Colorado Writers in Fort Collins, CO, where she attends Colorado State University. She is pursuing a degree in Chemical and Biological Engineering with a minor in Biomedical Engineering. After struggling with depression in her first year at college, she turned back to writing as a healthy outlet for her emotions. She wants to write strong female role models and is excited to share her stories with the world.

Would you provide an overview of the debut book, Descent of Shadows, that was released on December 11, 2018?

Humans have always called the land of Istamba home, yet Roland, King of the Wraiths, is intent on claiming it for himself. When Fort Lieay is attacked, thirteen-year-old Anna Lieay is the only survivor. Distraught from the death of her parents, she makes the dangerous journey to the Sanctuary, the last free human settlement. There, she vows to join the army, despite her age, to help save her home from the wraiths and restore peace to humanity.

What inspired you to write the YA Fantasy, Descent of Shadows, about a young girl who decides to fight back in her family’s war against the Wraith King?

I had a dream that I was walking through a great stone structure with a gold veil around it. As I looked out past the veil, I saw an army charging for the structure before I woke up. I couldn’t get that visual out of my head, so I named it the Sanctuary, and crafted a world around it.

The wraiths actually came out of my struggle with depression. I would have terrible nightmares about shadowy figures coming for me, and dark thoughts permeated my everyday life. The wraiths were sort-of born from those thoughts and by giving them distinct weaknesses, I was able to combat my own demons in my life and give my characters a great adversary.

With your busy college schedule at the Colorado State University, what inspired you to write Descent of Shadows? How do you balance between your classes and writing?

Again, a lot of my progress writing Descent of Shadows came from my struggle with depression. So, to keep myself from spiraling back into darker thoughts, I would write instead. It ended up being a great coping mechanism and something I found out I really enjoyed.

As far as balancing class and writing, it hasn’t been too hard. I’m studying Chemical and Biological Engineering, so obviously I deal with a lot of math and science in my everyday life. So having writing to fall back on is great. Sometimes, my head will be swimming with so many numbers and equations, that I just can’t keep them straight. So I write to try and calm my mind down a bit and relax. It’s been such a great escape for me.

Is there any sub-character in Descent of Shadows who is your favorite? Explain why.

Can I choose all of them? I actually really liked Colonel Wells. He opposes Anna in the story, but he provides a great obstacle for her to overcome. Without him, I don’t think she’d become as strong of a person. Plus, I really like writing villains.

How often do your characters surprise you when they do or say something totally unexpected?

Almost all the time, at least while I was drafting and revising Descent of Shadows. I wrote the entire novel without an outline and without any idea what was going to happen. I had 3 characters in my head, the villain, and the Sanctuary to begin with, and I just sort of wrote. Sometimes I’d write a short little scene and that would spark another character and then a whole new plot line would come about and on it went.

Now that I have more experience, I wouldn’t recommend writing like this. It’s confusing and give you a lot of trouble when you’re trying to revise and edit, but since I was using writing to improve my mental health, it worked pretty well to have something to build on.

Keep writing is the obvious advice, but I like to encourage a different level of that advice. If you want to write a novel and you’re really excited about the ending, write that first. There’s no rule that says you have to write in order.

When I submitted Descent of Shadows to my publisher, I did pitch it as a trilogy, and I’m so happy that they want to publish all of them. So Descent of Shadows, books 2 and 3 will be coming out in the next couple years!

I would love to be able to play an instrument like the guitar or piano. I tried to learn when I was younger, but I started playing basketball and volleyball instead. Then as I got older I realized I was tone deaf, but I think it would be so cool to know how to play.

I used to make and sell duct tape wallets. I’d make a bunch and go to various craft fairs to sell them, as well as selling to my family and people we knew. It was fun to be creative since I’m not a great artist. But I did go a little crazy with the tape and I still have a very large collection of printed rolls.

My family. We all have generally the same sense of humor so even just eating dinner is fun and hilarious. Plus we all love quoting movies and we have such a good time trying to guess where one quote came from.

There are a lot of things that I just can’t help but smile at, but I’d say the biggest thing is a dog. My sister has a French Bulldog named Carl and no matter what, just looking at him makes me grin. But really, if I see any dog, I’m automatically in a better mood. 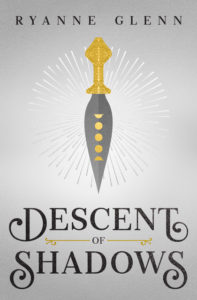