Find and Buy on
Amazon

AD 24. Catrin, a Celtic princess, and Marcellus, a Roman, were ordered to gather information about each other’s families. They were never supposed to fall in love. Marcellus is the great-grandson of Mark Antony, and he fears his budding affection for a foreign princess will lead to his own early death as befell his infamous ancestor. Catrin is a warrior princess with the powers of ancient druidesses running through her veins. There is a dark prophecy hanging over her family, and Roman support of her brother, banished for beheading two children and physically attacking Catrin, casts the curse into their midst. As Catrin begins to harbor feelings for her family’s enemy, will she be able to overcome the dark magic which threatens to destroy her homeland? Or will Catrin’s and Marcellus’ forbidden love incite a war for which her brother, the Blood Wolf, will lead the charge?

Apollo’s Raven is a historical fantasy with strong elements of romance, political intrigue, and magic. Many surprising twists enrich the historically-drawn plot. Points of view shift between different characters effectively, heightening the tension from one moment to the next. I love the scenes contrasting the cultures of Celtic Britannia and Rome, during which Tanner’s research really shines. My only complaint is that some of the dialogue is marked by modern words and expressions. Overall, though, this is an intriguing story with multifaceted characters, including confident and intelligent women protagonists, along with high-stakes situations that will keep you turning the pages. Recommended.

REVIEWED BY J. Lynn Else

The Apollo’s Raven e-book is being offered as a special deal of 99 cents at various online sites for a limited time until Aug. 6th.  For further information, visit Bargain and Free highlighted on Uvi Poznansky’s website or click on one of the following sites: Amazon, Barnes and Noble, or Kobo.

As always, I would greatly appreciate your honest review of Apollo’s Review on the site where you purchase the book. Reviews are one of the best ways readers can help support an author.

Below are photos of special friends and supporters from Hitchin who helped me celebrate the launch of Apollo’s Raven when I visited the United Kingdom in July 2017. 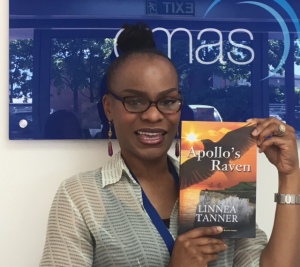