When I was writing the second book, Dagger’s Destiny, in the renamed series, Curse of Clansmen and Kings, the story went into a direction I had not anticipated. It is based on the concept of the Celtic sovereignty goddess. The goddess associated with the land confers kingship upon a mortal man whom she decides is worthy to rule. The sacred marriage ritual of the sovereignty goddess is hinted in The Mists of Avalon by Marion Zimmer Bradley. The mystical Morgaine is chosen as a symbol of the Goddess to sleep with her brother, Arthur, and confer kingship to him.

Below is an overview of some of the mythology and rituals associated with the Celtic sovereignty goddess.

The idea that the divine female personifies sovereignty is persistent in early Irish mythology. She is the goddess of the land, the spirit or essence of Ireland itself. Fortunes, fertility, and prosperity of her territory depend upon her guardianship. The Celtic sovereignty goddess legitimizes a mortal king by marrying and/or having sex with him. Stone carvings of a divine couple representing the goddess of the land and the mortal king have been found in regions of France, United Kingdom, and Ireland. The goddess often carries a cornucopia, a symbol of abundance. Her male companion often bears a spear, a symbol of protection.

The Celts and Roman venerated the  horse-goddess Epona as a protector of their soldiers and their mounts. She represents the well-being of the tribal land with domestic prosperity and fertility. However, lands must also be protected and defended through warfare. Both Romans and Celts prayed to Epona to protect their horses used in battle.

Epona with Her Horses

The nature of  the Celtic sovereignty goddesses is dynamic and complex. She is responsible for the fertility of the land. In this role, she symbolized sexual promiscuity and polyandry. Her marriage to several successive mortal kings is not the result of unbridled sexual appetite but the need to choose the best consort for the benefit of the realm. Sexual prowess and the ability to shape-shift were also frequently linked. For instance, Morrigan had the power to transform herself into a raven.

Many of the sovereignty war goddesses were represent as triplicate goddesses with different functions. She was first and foremost a goddess of war and destruction, but was also strongly linked with fertility and sovereignty.

A key aspect to the Irish sovereignty myth was the sacred marriage. It is the ritual union of the goddess of the land with the mortal king. The key element of the sacred marriage—and kingship—was the consummation between the king and the goddess of the territory he was to rule over. The goddess only enters this marriage if the king is suitable, and even after marriage, she can reject a weak ruler in favor of a man who is better suited.

The ritual of the goddess handing the sacred goblet of wine to the king symbolizes his sacred partnership with his kingdom. Their sexual union legitimizes his rule over the land, which should then make the kingdom prosper. The goddess Eriu, after whom Erin (Ireland) is named, gives her mate a golden cup of wine, interpreted by some as symbolic of the sun.

One of the best known figures in Irish mythology is Medb from the Ulster Cycle. She is a queen-goddess who emerges as the great Connacht leader of the conflict with the neighboring province of Ulster. She is sexually vigorous and a warrior, with the death-dimension seen in the Irish Goddesses Macha and the Morrigan. She emerges as a powerful ruler with substantial wealth and leads her kingdom’s army as a battle-commander in the campaigns against Ulster. Mebd would ride her chariot around the battlefield, encouraging her soldiers. She started quarrels and bribed warriors to take up arms against friends and relatives. She gloried in war, bloodshed, and destruction; she was the essence of death.  She mated with nine kings and allowed no man to rule at the royal court of Tara unless he slept with her. 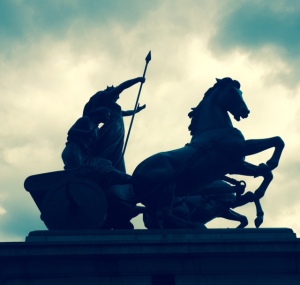 Mebd is interpreted as “she who intoxicates,” and is associated with mead. Drinking of liquor emboldens warriors with a fighting temperament and symbolizes the union of the sovereignty goddess with the mortal ruler.  Given the close relationship between inauguration and drinking, part of the king’s inauguration involved his intoxication (at the hands of the goddess, in the process of their marriage). The ritual drunkenness during inauguration opens the king up to an ecstatic state in which he is lifted out of himself in the hope of  contacting with the divine. The drink itself is representative of sovereignty. Accepting the drink being served by the goddess of the land is the same as accepting the kingship.

The Celtic goddesses were guardians and protectors of the land. Much of the power of these goddesses stemmed from their sexuality. Not only was sexual energy linked to fertility and abundance, it was associated with warfare, sovereignty, and healing. These goddesses were powerful entities that embraced the entire religious spectrum: from warfare to healing; from sovereignty to destiny; from creation to destruction. They could be capricious and vengeful but also gentle and benevolent. Their treatment of humans depended on the respect shown to them.

The following is a reblog of post entitled “Mythology: Psychopomps, Border Crossers and Guiders of Souls”🌟 dated 10/11/2017 by Aquileana. This is an insightful and informative post that relates mythical elements of the psychopomp to Jung’s theory of the conscious and subconscious. It is fascinating how various religions throughout history have used the concept of the psychopomp to describe how various entities guide the spirits of the dead on their journey to the underworld or spiritual world.

As I love Celtic mythology, I have taken the concept of the raven as a messenger that can transverse both the spiritual and physical world in my book Apollo’s Raven that is briefly mention as an animal psychopomp in the post. Hope you enjoy article which provides insight on how mythology relates to the modern world. 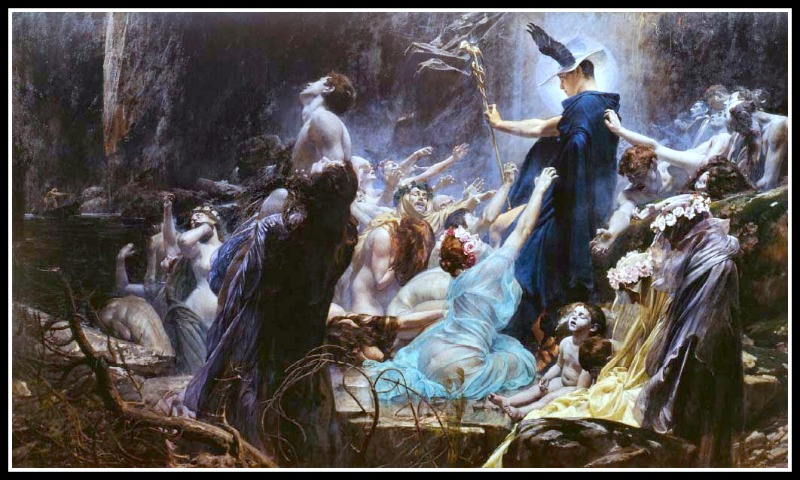 “Souls on the Banks of the Acheron”, by Adolf Hirémy-Hirschl. 1898

⇒♦ Introduction. Definition of Psychopomp and Sketch of this post:

A Psychopomp is a god, spirit, or demon who is responsible for guiding the spirits of the dead on their journey to the underworld. His role is not to judge the deceased, but simply to provide safe passage. The word comes from the Greek   ψυχοπομπός, which means “conductor of souls.” Psycho– (ψυχο) originally meant “of, or relating to the soul,” while pomps (πομπός) meant “guide” or “conductor.”

Classical examples of a Psychopomp are the ancient Egyptian god Anubis, the Greek ferryman Charon, Hermes and Hecate, the Roman god Mercury (equivalent: Hermes in Greek Mythology) and Archangel Gabriel in the Catholic religion, to name the most important ones.

Firstly, in the first section (I), let´s look at some examples of Psychopomps in Mythology. 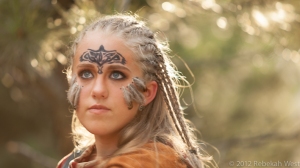 “In the traditional mythological tradition, the woman is there. All she has to do is to realize that she’s the place that people are trying to get to. When a woman realizes what her wonderful character is, she’s not going to get messed up with the notion of being pseudo-male.”

Since childhood, ancient mythology has fascinated me because of the significant roles that women played in the tales. They were powerful goddesses, mothers, warriors, creators, and destroyers. Women were not only associated with fertility and birth, but with warfare and destruction.

Women have already had a power that men did not have—the power of creating life. Early ancient civilizations acknowledged this power through the Mother Goddess who ruled supreme over all. The ancients held women’s ability to create new life inside her body in awe and feared the mystical blood flows that synchronized with the phases of the moon. Women were considered magical and the intermediaries between the physical world and spiritual world. They could serve as seers, priestesses, healers, oracles, lawmakers, judges, and agents of the Great Goddess Mother who gave birth to the Universe.

The hero’s journey as described by Joseph Campbell is a journey to the depths of our psyches where we discover spiritual meaning to our lives. It allows us insight into our souls where there are no boundaries between the spiritual and physical worlds. The ancient myths celebrated a female’s courage and cleverness to rescue their family, to be a partner on the hero’s journey, and to spin ways to overcome the giants in their way.

Statue of Boudica in London

It is no wonder myths have flourished throughout history because the tales and symbols reflect our universal struggle to find spiritual meaning in our everyday lives. Universal symbols in myths and dreams are connections into our creative, intuitive side. Unfortunately, the evolution of paternalistic societies and the emphasis on science, analytical reasoning, and technology in modern times have often left a void where people feel they cannot connect to each other and discover the spiritual meaning of their own lives.

The heroine’s journey has always existed in epic myths, but it was often understated. Many ancient myths were unfortunately rewritten to reflect the religious and cultural beliefs that depicted women as seductresses and witches, or as pure-minded maidens and mothers.

In today’s society, women oppressed by the hero quest see only two choices:

However, the heroine’s true role is neither to be hero or his prize. The power of women was reflected in the worship of the Great Goddesses who battled darkness. Her worship once dominated ancient mankind. She was the earth and sea from which life was created. She offered her feminine qualities of beauty, imagination, and compassion.

But she also offered death and savagery. The primal goddess reigned uncontested for centuries as Ishtar, Morrigan, and Cybele who could be cruel and lustful goddesses.  Many of these tales celebrate the metaphoric death of the inadequate self to resurrect into a higher plan of existence.

For both men and women, myths helped their passage from childhood into adulthood. In the original ancient tales, heroines were brave, resourceful, and clever. They accustomed to saving themselves and their princes. Myths are the collective conscious of humanity to help the next generation face conflicts and journey to self-discovery.

When I began writing the APOLLO’S RAVEN series, I grappled writing about my heroine, a Celtic warrior princess. Ancient mythology gave me insight into the complexity of women that provides them with both the courage and wisdom to overcome the monsters in their lives. Women not only ascend into the heavens as goddesses, but delve in the Underworld to face the shadowy parts of their souls. From these destructive forces bring forth new life. The heroine must use her darker feminine side to balance compassion and cruelty when overcoming evil forces in her journey.

Only after the heroine understands her dark side can she gain the wisdom to guide others needing her counsel, especially children. The heroine travels between the mortal and spirituals worlds to become a goddess and protector of others.

The next posts will further explore the heroine’s journey with particularly emphasis on Celtic mythology of powerful women and goddesses.