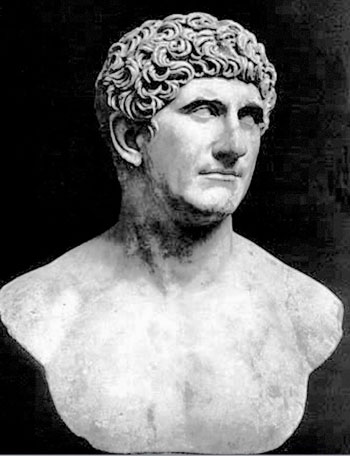 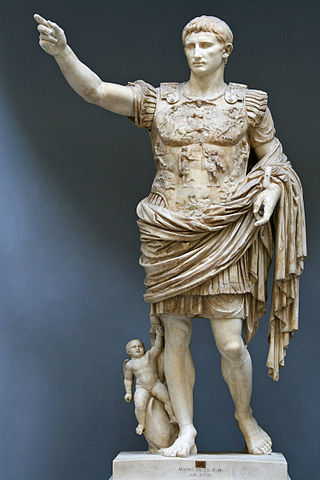 “Claudius undertook, in all, one expedition and that one was of no great extent. When he was granted triumphal ornaments by decree of the Senate, he thought that the title was not weighty enough to grace the imperial magistracy and craved the distinction of a proper triumph.”
—Suetonius, Life of Claudius.

Emperor Claudius is credited for the Roman invasion of Britain in 43AD. He was the first emperor born outside of Italy in Lugdunum (Lyon, France). As the son of Drusus and Antonia Minor, he emphasized his right to rule as a member of the Julio-Claudian dynasty.

Claudius was also the grandson of Mark Antony, whose marriage to Octavia (Octavian’s sister) resulted in the birth of two daughters, one being Claudius’ mother. Shortly after Antony’s defeat and death in 30 BC, Octavian declared his rival’s birthday, 14 January, as nefastus (unholy). Of note, Claudius’ father also had the same birthday on January 14—a day no public business could be transacted in Rome.

Not only did Claudius restore the memory of Antony, he also needed a conquest which he could earn a triumph to legitimize his rule against potential usurpers. Suetonius dismissed the Roman invasion of Britain by Claudius as of no great importance. “Claudius decided that Britain was the country where a real triumph could be most readily earned. Its conquest had not been attempted since the days of Julius Caesar. The Britons were now threatening vengeance because the Romans had refused to return some fugitives.”

The written account of the Roman invasion of Britain in 43AD is primarily based on Cassius Dio’s “Roman History.” Unfortunately, his account gives very little detail about the campaign. The only resistance the Romans encountered was the forces led by Caratacus and Togodumnus, the anti-Roman sons of Cunobelin from the Catuvellauni tribe.

Opportunity for a Triumph

In 41AD, Caratacus strategically positioned himself in Silchester, so he could thrust westward to grasp the lands of the Dobunni and of the Atrebates, ruled by the elderly Verica. Verica fled to Rome seeking help from Claudius to stop the aggression. Caratacus and Togodumnus countered by arrogantly demanding that Claudius return their pro-Roman brother, Adminius, and Verica to Britain. Their demand instead triggered the emperor’s decision to send four legions to settle the political differences. Claudius would later use this as a propaganda tool to convince the Senate that he deserved a triumph for conquering Britain—a task left undone by his great ancestor Julius Caesar.

The Britons must have been misled to believe that Rome’s only intent was to provide legions for peace-keeping. Most tribes that felt the expansionist weight of the Catuvellani had no reason to resist the Romans. The Atrebates viewed the empire as their saviors.

In the summer of 43AD, the Roman legions led by Plautius did not encounter any British resistance after they landed. They had to search for the troublemakers, Caratacus and Togodumnus.

The first battle took place at a river that many believed was the Medway in Kent. Armed Britons waited for the Romans on the other side of the waterway that had no bridge. Plautius sent some auxiliaries, who were accustomed to swimming in full armor, across the waterway to wound the horses that drove the British war chariots.

Soon after, Flavius Vespasian crossed the river with his troops and surprised the Britons. The ensuing battle lasted for two days until reinforcements from another Roman legion proved the turning point.

The British warriors then retreated to the River Thames, possibly the Tidal Pool of London, east of the Tower Bridges. After some more fighting, Plautius stopped his advancement and sent for Claudius to lead the final charge. By this time, Togodumnus had died from injuries suffered from battle.

Extensive preparation had already been made in advance of Claudius’ arrival. Various types of equipment, including elephants, were gathered to support the emperor’s final charge into battle.

Claudius arrived at the Thames toward the end of summer. He crossed the river, defeated the enemy, and captured Camulodunum (Colchester). Cassius Dio says, “He won over many people, some by diplomacy, some by force of arms. He confiscated the weapons of these peoples and handed the tribes over to Plautius, and left him with orders to subdue the remaining regions.”

Claudius was in Britain for only sixteen days to achieve his glorious victory. He rushed back to Rome for his triumph and accolades. The inscription dated 52AD on the Arch Claudius in Rome was dedicated by the Senate and the People of Rome in recognition of Claudius receiving the submission of eleven kings without loss. The phrase “without loss” confirms Suetonius’ account that British princes submitted without battle or bloodshed to the emperor in Colchester.

Linnea at Roman Wall at Colchester

It is now theorized that Rome culminated the processes of subjugating at least southeast Britain and of bringing that area under its complete control before 43AD. Viewed in this light, the Claudius’ campaign in 43AD was not a military invasion, but rather a political annexation of an already ‘Romanized” region.

The primary evidence leading to this conclusion is as follows:

Replica of a Dining Room at Fishbourne Palace

There was precedence of Romans stationing legions beyond the formal frontier of the empire’s rule. Julius Caesar stationed three to four legions with Cleopatra after he restored her to the throne in 47 AD. Feel free to comment on whether you believe the theory that the invasion of Britain was nothing more than a ploy by Claudius to legitimize his role as the Roman emperor.

My website is undergoing development in anticipation of the launch of my epic historical fantasy, APOLLO’S RAVEN, next year. The next series of posts will focus on the historical background and themes in the upcoming series.

The concept of what constitutes a heroine’s journey for the main character of Catrin, a Celtic warrior princess, will be discussed. Mark Antony—the inspiration for Marcellus, Catrin’s lover—will be explored in a new light.

Please join me on my journey of discovering how history and mythology can relate to each one of us today.