The Triplets by Nicole M. Davis

My rating: 4 of 5 starsThe Triplets by Nicole M. Davis is the debut young adult fantasy in the Six Sorcerers series. The story is about three teenage boys and three teenage girls who are whisked away from their safe, modern day world of Denver, Colorado into the realm of magic-filled Sarenia. They are typical of most teenagers who are struggling with self-doubts and must find the courage to overcome dangers in the fantastical world of sword and sorcery. The story begins when each of the boys receives a letter from Mr. Lee that warns something is about to happen to him. Each boy disappears through a portal into a fantastical world where the three girls have already been transported from Colorado. Each girl has already assumed a role, including: a captain of a pirate, a knight in the king’s guard, or a dragon rider. The girls also receive letters telling them that they must find each other and the boys. The story is primarily a quest for the young people to find each other and to discover their sorcery powers.Author Davis captures the unique voices of the teenagers in the story. The tale alternates between the perspective of each of the primary six characters. The reader is challenged to track the complex plot for each of the main protagonists. Each of them has a unique personality and handles challenges differently, adding fun to the story. The tale is primarily an introduction to each of the characters and their journeys of self-discovery of what their unique powers entail. Although the writing is smooth for the most part, dashes should have been used when action interrupts dialogue instead of commas to avoid confusion. An example of incorrect punctuation is: “… Don’t forget, Kaylor, that if your actions start to stray,” he brings his fingers up and snaps them in front of her face, and Kaylor flinches despite herself, “It will burst …”The coming of age fantasy is recommended for young adults who will readily relate to the characters. I look forward to reading the next book in the series to see how these young people use their powers in this fantastical world with mythic creatures.View all my reviews

It is my pleasure to introduce Nicole M. Davis, an exciting Colorado author of YA fantasy. I met Nicole at a Christmas party that was sponsored by the Boulder County Independent Authors (BCIA). There, I learned about her debut book of teen sorcerers, The Triplets (Book 1 Six Sorcerers), and was quite intrigued with her volunteer job at a museum. 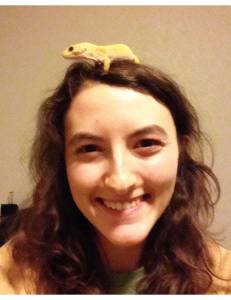 Below you will find Nicole’s biography, author interview, and contact information. Be sure to check out Nicole’s website and learn more about her. She’s a lot of fun to get to know, as you will see in her interview.

Nicole Davis was born in Sunnyvale, California (one letter away from the vampire capital of the world), but she grew up in Boulder County in Colorado. She has a bachelor’s degree in Zoology with a minor in Creative Writing. At the moment she’s back in Boulder County living with her family and a small army of scaly pets. She probably started writing when she was about five years old, and hasn’t been able to stop since.

Would you provide an overview of your debut book, The Triplets (Book 1: Six Sorcerers)?

The Triplets is the first book of the Six Sorcerers series, a young adult epic fantasy series about six teenagers who get sucked into a world full of sorcerers and dangerous mythical creatures and must find each other in order to find out who they are and why they were brought there. It’s also about a rebellion against a sorcerer-hating tyrant that’s on its last legs, a sinister and supernatural plot that involves the gods themselves, and a country that’s on the brink of starting a world war. 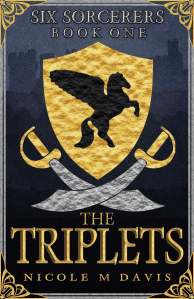 What inspired you to write the YA Fantasy, The Triplets, about three teenage boys and three teenage girl who are transported from modern-day Denver, Colorado to the fantastical world of Sarenia?

When I was around 16 or 17 years old, the main characters from The Triplets just kind of showed up in my head demanding to be written about. So I had these characters running around in my head, but I didn’t really have a place to put them.

I’ve always loved fantasy, and I think world-building is loads of fun, so I decided to make up a giant, complicated fantasy world (with an equally complicated plotline) just for these characters. I wanted to have them start out here on Earth though, because the original image I had of them was as high school students like myself. I also thought it would be cool to write about this new world from the perspective of outsiders, so that my readers could discover this fantastical place alongside my characters.

How do you balance your busy schedule work schedule with writing?

I have a full-time job in an Amazon warehouse and I volunteer at the Denver Museum of Nature and Science on a weekly basis in addition to writing, so yeah, I’m a very busy person right now. I don’t have nearly as much time as I used to, though, and it’s taking me much longer to write book 2 than I’d anticipated. I’ve also had some issues trying to keep up with my blog and marketing lately because I just don’t have the time or mental energy for it.

But writing is still my priority and I make time for it whenever I can. I set aside at least a few hours every weekend to write, and I try to do a full day if I can.

Is there any character in The Triplets who is your favorite? Explain why.

That’s like asking a parent to choose their favorite child. I refuse. I can’t do it.

But seriously, it varies from moment to moment. Sometimes Kaylor’s my favorite because she’s so fair and kind and kick-ass, but then sometimes I like Sarah better because of how complex her personality is and how much she grows as a leader. Then sometimes I think Tyler’s attitude and inner monologue make him the most interesting. But Anna’s so perceptive and delightfully mischievous, Alex is so kind and brave and resilient, Darn’s funny and sarcastic and so much fun to write.

They’re all interesting people with different flaws and strengths and character arcs, and I’m happy with how each and every one of them is changing and growing throughout the story.

So I am definitely a plotter. My outlines have outlines, etc. And most of this is plot-based. But my characters do not like to listen to me, so I have to change and adjust things a lot. Mostly they decide to make a bigger deal out of things or integrate themselves further into the main story line than I’d originally planned. It’s kind of hard to talk about in detail without giving away any spoilers, but here are a few examples:

I did not expect Sarah to be so ambitious. She was originally supposed to be sort of a “reluctant leader” archetype, but by the end of the book she’d decided she wanted to take charge and do it now.

Mr. Lee was originally a throw-away character who only existed to fill out part of Tyler’s backstory, but he forced his way into the main plotline, developed his own complex backstory, and now he’s getting his own spin-off.

Also, Anna almost never reacts to people the way I expect her to: she decided she really did not like Darn at all as soon as she met him (I thought she’d be sort of aloof and indifferent towards him), took an instant and intense liking to Alex (who she wasn’t supposed to bond with until around the middle of book two), and decided she was going to push down and hide her hurt and jealousy over Kaylor choosing the Prince’s side over hers (I thought she’d be more outspoken and argumentative about this).

If you’ve just started writing, your writing is not going to be good. You are going to get rejections and criticism, and it’s not going to feel great. Just power through it all and keep writing. Listen to the advice that you get. And be patient with yourself. You might not be there yet, but you will get there. Keep writing, keep reading, and keep submitting stuff.

If you want to get good at editing your own work, start looking for flaws in everyone else’s work (especially your favorite books). BUT keep in mind that literally nothing is perfect, these books you’re finding flaws in are still good books even though they’re flawed. Everything you write is going to be the same way.

Yep. First there’s book two, then book three, and then I have plans for Mr. Lee’s spin-off book. I’m also working on a book of short stories set in this world that’s going to be called People of Sarenia. I also have plans for writing a Traveler’s Guide to arenia. Most of this is going to take me a while to get to.

What are three things you think we can all do to make the world a better place?

I usually like people who are just as weird as I am. This guarantees that they can’t judge me. Tying into that, I tend to like people who can handle my slightly off-kilter, dark sense of humor, because neither of us will have fun around each other if I’m cracking strange jokes that only freak them out.

But they also have to be patient and kind, because I can’t stand people who are mean to anyone for no good reason. And people I can trust, and who I know I can count on if I’m ever in trouble or need help or advice.

Time-travel, hands down. I want to go back and see the dinosaurs. I also wouldn’t mind having some extra time to write, ha.

But if we’re being boring and talking about real-life skills, I think I’d want to be a better salesperson. If I were, I’d probably be able to make more money selling my books, and then I wouldn’t have to have a full-time job too.

I’m an amateur taxidermist and I collect animal bones. This started because of my zoology degree, during which I decided to volunteer at my university’s Museum of Vertebrates. There, I helped prepare skeletons and alcohol specimens, and it was great. Museums keep specimens like these to aide researchers with conservation or other projects: it can be incredibly helpful to have morphological data on a species spanning years or decades.

I have a meager collection of my own, including the skeleton of one of my deceased pet geckos that my best friend prepared for me and a couple bird skulls from invasive species (killed by my cat before I could intervene and save them).

You can contact and learn more about Nicole Davis and her book: